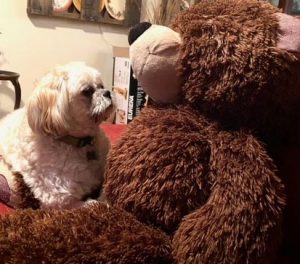 UPDATE: 12/31/2020 It is with a heavy heart we inform you that Oliver has crossed over the bridge. Thank you to all that donated and gave his family a little more time with him. Our thoughts and prayers are with his family.

Our baby, Oliver, is a 4 years old cream colored shih tzu. Just before his birthday in October he started drinking and urinating a lot. Originally the vet had believed he an infection so we began treating him for that. Oliver stopped eating, we thought that was a result of the antibiotics. After 2 more weeks and a few more vet trips trying to figure out why Oliver was not getting better and losing weight, the vet discovered his calcium levels were dangerously high and his other labs were puzzling so Oliver was admitted to the anne arundel emergency care hospital. During his couple days in the hospital to treat his hypercalcemia, the drs there diagnosed Oliver with lymphoma. Oliver is the sweetest cuddliest baby boy. He loves playing with his brother Stanley. We love him incredibly. We have been so blessed by him and we want to give him the best care available to him, he is only 4 years old.