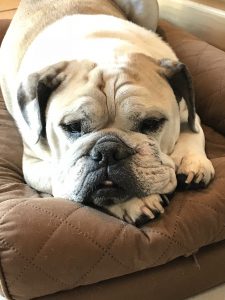 Update on Mack 6/9/18 He is home doing wonderfully! He’s eating and drinking and his swelling has all gone away. He will get his staples out on Tuesday. Thank you to all that donated.

Mack was diagnosed through a heartworm test as having anaplasmosis on Wednesday May 23, 2018. he started declining within 48 hours, his platlets were going down, and the bllodwork came back showing very concerning information, my vet, called me on Saturday morning and asked that I bring him in for Xrays, because she was extremely concerned about his decline. After looking at the Xrays, she wanted him to have an ultrasound, because of the holiday weekend, there was only one in my town available, but I did take him over to our emergency vet to have a quick scan of his belly done, the vet there was also very concerned with the xrays, but didn’t see any free fluid, but insisted that I take him immediately to the NC State Hospital in North Carolina. We rushed him up there and they also didn’t like the xrays, but no ultrasound tech there unless on an extreme emergency, which they were going to wait and watch to see if any drastic changes due to the high costs. Before the ultrasound could be done, they determined that he needed a transfusion immediately and were going to rush him into surgery becuase his platelets had gone down to 16. The ultrasound tech happened to finish a CAT scan on another patient there and quickly did one on Mack, it was determined that not only did he have the Anaplasmosis, his spleen had twisted on itself and was dying, they operated and removed his spleen and he is still there in ICU.