Just under 3 weeks ago, Coby became very sick and started vomiting and had diarrhea. 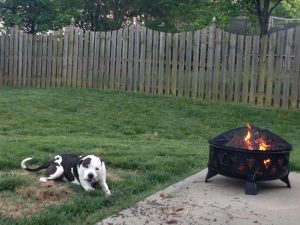 Thinking at first possibly a stomach virus, we switched him to bland food and he got a little better. Then he got worse again and started looking a little yellow. We brought him to the vet two weeks ago today. His Liver ALT’s and bilirubin levels were very high. Starting the next day, Cody started two IV treatments a day. And an x-ray revealed a very small liver and an ultrasound evealed blocked bile ducts as well as pyloric valve stenosis. Through the next week or so, Coby would improve one day, but deteriorate the next. Starting at 85 lbs, he was now down to 77 lbs. A change in medicines started to help during week two of the treatment, but the bill was growing rapidly. We already had over $500 on Care Credit and just added another $2,000. Late into week two, we were told Coby still needed at least another two weeks of treatments, as well as a possibly $1,200 surgery coming up either tomorrow or the next day. And now the poor guy is down close to just 70 lbs. Coby will still have to continue regular visits to the vet the check blookwork, have an ultrasound, etc. for months to come. Dr. Chappell (his lead vet, and the surgeon there) feels like Coby will have a full recovery. And with some major diet changes, hopefully he’ll stay healthy for many years to come. But we are running out of money, so we need help! The Vet office will also take donations directly the contact information is Carolina Place Animal Hospital 803-547-3547 be sure to reference Coby Camilini