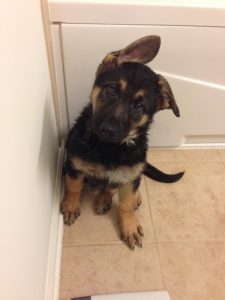 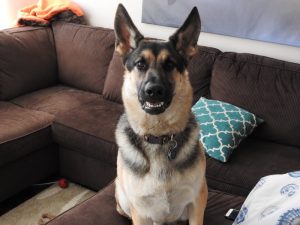 Tucker is a Very Special dog, he has gone through so much in his life, so much stress, heartache, disappointment, pain and suffering :
He was trained by his original owner as a police dog only to have to relinquish that position due to a left front shoulder separation break / tear injury that left him shelved.
Now he was of no use to the original owner? Due to his training, he was also never socialized with other people or pets.
Then he was part of a divorce of that owner which landed him in several homes / states and, eventually ended up in Delaware with the wife’s father (co-owner).
It turns out that the father either did not know how to handle / control Tucker, or just didn’t care, so he admittedly put a shock collar on him for several month’s to try to control Tucker.
Actually, it was a Very Abusive practice due to the fact that when he was trying to either stop or correct Tucker, he would shock him, no beep / sound warning first, just shock him.
Even worse was that fact that the shock strength went to 15 in the settings, it was set to shock Tucker at 14. Needless to say, Tucker suffered nerve damage from it.
So then the father had a “supposed” trainer come into the Tucker’s home and try to train him ? Needless to say, the “supposed” trainer was in Tucker’s home and when the trainer tried to discipline Tucker, Tucker lunged at him and the father yanked the leash back / away from trainer then Tucker also bit him on the side of his eye, several stitches were needed.
If that’s not enough, they were now going to put Tucker down because of it, then I came along and said no, I’ll take him.
I tried to explain to the father that everything Tucker did, especially from what he was going through, was all just a natural and normal reaction.
The first time I met Tucker, w/in 20 minutes he was eating a whole box of biscuits out of my hand.
Then in April of this year, Tucker ripped / tore his right rear knee A C L, not sure how he did it. He was running and playing with his sister Ivy, I heard a yelp which I thought was Ivy due to Tucker sometimes unknowingly got to rough with her. However, when I turned around, Ivy was nowhere near Tucker and he was holding his right rear leg up, he could not put any weight on it.
So I called Cornell University in New York and took the earliest appointment in the orthopedic dept., which unfortunately was several weeks away (June 17, 2019)
At the appointment, he was examined and the injury confirmed, discussed the surgery procedure and the prognosis, which was good if he had the surgery , as well as a surgery date was set for 09/11/2019.
I am disabled due to several spine and neck operations in the past several years so I am on a Very Limited income with my S I Disability and that is why I am reaching out for help from several different agencies / foundations / Go Fund Me as well. So Please,, help if you can, no amount is to small, and Please, pass this on to all your friends / family / contacts, it will be Greatly Heartfelt and Appreciated by Tucker – Ivy and myself
This dog has truly suffered enough already, so Please help us put him back together, literally! Tucker has never really had a puppy life and that is probably why he plays the way he does . At his age (5 ½ y.o.) he should be starting to slow down but he is not slowing down, he is living that puppy life he never had!
Brought Tucker home, gave him space for about 6 weeks, then I started slowly to communicate with him, eye contact, tone of voice, and once in a while, a smack on the snoot to either get his attention or to discipline him. For about two weeks of this training, he would show me his teeth and I just told him that he had his adjust time now it’s time to learn.
Then I started to socialize him with other people and pets which took a little longer, however, he has aced that as well. Now he is like a Big Teddy Bear that’s always looking for attention !
He also loves his sister Ivy Very Much and is Very Protective of her, loves to play with her all the time! Ivy is a trained service dog which is what I also want to train Tucker as, now that I got him through the rough spots / times.
Thank You Very Much for your time and consideration!