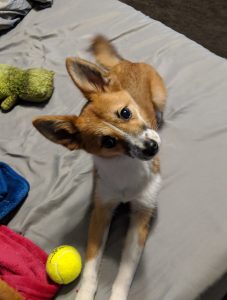 9/9/2020 It is with much sadness that I have to inform you that Toby has crossed the rainbow bridge. Please keep his family in your thoughts and prayers as they deal with this difficult blow.

UPDATE August 2020: Toby has been waiting for surgery due to Covid, surgery was finally scheduled for September and unfortunately he took a turn for the worst. Toby was rushed to the ER and is now stable and doing better. The ER stay has drained quite a bit of the surgery funds and so we are back to fundraising to make up the deficit. Please also keep him and his family in your thoughts and prayer that he stays stable until we can get the funds back to schedule surgery again.

We got Toby and his brother when they were 3 months old and they are now 8 months. A week after we bought Toby, he had a seizure. We called the emergency vet and they weren’t too concerned about it at the time. A couple months go by and we take Toby and Baxter, his brother, to be neutered. I asked that they run test on Toby because he was much smaller than Baxter and he would never eat. They did blood work and his levels came back elevated & our vet was suspecting a liver shunt. They held off on neutering him also before his scheduled neuter appointment, he was diagnosed as being crypt-orchid. The next day I took him to Medvet ER where they did an ultrasound, he was diagnosed with a small liver and a bladder stone, but they didn’t see a shunt. The Medvet ER vet recommended a CT scan to rule out a shunt. He was put on some medications for about a month and then had an ACTH stimulation test done that came back normal. Our primary vet retested his blood levels and they were still elevated, so that’s when we decided we had to do the CT scan.
He went to Ohio State Veterinary Hospital on November, 20th where he was diagnosed with an intrahepatic liver shunt through a CT scan with contrast. We really want to opt for surgery but it is so expensive, the quote we got was between $6,000-8,000. We are trying to raise the funds but need some help. Our little Toby deserves to live a good quality life. As of right now he is on a special diet and medical management, but that won’t cure his problems. A lot of dogs are euthanized within 10 months of being diagnosed due to neurological problems and some won’t even make it to be 4 years old. This disease causes seizures, stunted growth, low muscle mass, loss of appetite, depression, lethargy, encephalopathy and much more. We would really appreciate if someone was able to help us, this is really a trying time for us.