UPDATE: Stella’s first surgery went very well and she is home recuperating before the second one. Any help is appreciated. 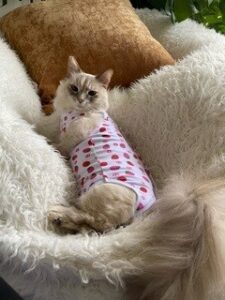 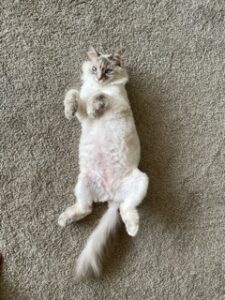 When Stella was 9 months old, she was brought into the intake room of the humane society I was volunteering at, and she stared at me with her big, blue, crossed eyes, and that was it. We’ve been inseparable for the last 12 years. She’s been by my side my entire adult life from new jobs, bad breakups, stressful moves, she’s there. Stella (Stu for short or Stewart for long) was the only cat that Bubba, my other kitty, would allow as a sister. She waits by the door until I get home, sleeps on my pillow, screams at me from the shower tub until I get out. She is my little floof of a shadow. She snores like an old man and sheds like a cotton ball, and I cherish every second with her.
A few weeks ago, Stella was in for her routine lion’s cut she gets every summer when her vet found a lump on her nipple. Everything moved very quickly after that. They did her biopsy, and shortly after, she was diagnosed with mammary cancer. It’s been my worst nightmare. She’s in need of a radical bilateral mastectomy and chemotherapy in order to put her in remission. I am so very grateful for the wonderful veterinarians who caught her cancer early on and have a plan to heal her, before it’s had a chance to spread. After talking with the staff at her oncologist’s office, they told me her treatment could cost around $14,000-15,000 in order for her to get both surgeries and chemotherapy. Stella and I have been seeking all the help we can get. While it’s been worth every penny, it has cost more money than I was prepared for. What is keeping me strong is that if she gets her surgery, she’ll have a second chance at life. I am sick to think that Stella can beat this cancer, but I don’t have the financial resources to cover her costs by myself. As a loving cat mom, I know that this is the road Stella needs to take. I’m hanging onto the fact that other than these masses; she is a very happy kitty who is acting completely like herself. I would be eternally grateful for any help Stella can receive. Love knows no boundaries. I don’t know how I ended up so lucky in life that I get to be Stella’s mom, but I’ll do whatever I can to get her the help she needs. Thank you for hearing her story.