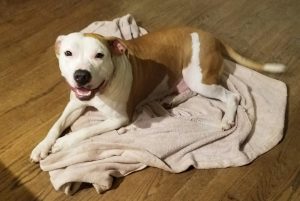 February 3, 2017, Lola underwent spaying. Following, she returned home and was resting as she was still quite sedated from her procedure.  I checked on her several times while she rested. This time when I returned, Lola was sitting in an upward position in her crate.  When I opened the door and call for her to come on out, she didn’t respond.  I walked away thinking she would follow but this time she didn’t.  I walked back towards her crate where was then in a standing position. This time I motioned for her to come to me.  As she attempted to walk out of her crate, I noted her blanket was saturated with blood.  I did what anyone pet owner would do and PANIC!! Upon attempting to stop the bleeding, I thought “this couldn’t be normal”, As Lola stood there, legs shaking, and helpless, she began to vomit.  Following, I immediately prepared Lola and for transport to the nearest vet.  I took her to my local vet.  She was immediately taken to the back, triaged, and was given fluids to help keep her remain hydrated since she was losing so much blood.  The vet contacted the ER and informed them of the situation and that I was en-route.  Upon arrival, Lola’s was assessed and X-rays were taken.  It was necessary that Lola under go another surgery in order to repair the problem and stop the bleeding.  Keep in mind, she had just had surgery that same morning.  It’s no easy decision when your pet requires care.  The best plan of action in this situation would be to return to the location where Lola had her surgery.  Unfortunately, they had closed and would not re-open until Monday.  There was no way I could leave Lola in such a situation.  I love my pets with my entire being and did what any pet owner would do – get her the needed care.  When I left the vet, I felt Lola was in good hands and would be okay.  This expense has taken us to a new height within our financials.  Therefore, I pray for favor over this situation and that anyone reading my story can find it in their heart to help.  I am thankful for any contributions towards Lola’s care and owe many thanks to Dogs and Cats Veterinary and Companion Bridge for their support and willingness to help.  God Bless!