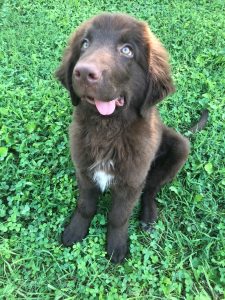 UPDATE 10/27/2020 Unfortunately the CT showed significantly worse bone fusion than originally expected, so his condition is inoperable. We thank everyone that made his diagnostics possible and we will be keeping Ralph and his family in our thoughts and prayers.

Ralph came to us in July, when he was just a 9 week old puppy. He was underweight, had worms, and lacked the normal puppy energy. He also had an extreme overbite. We took him to our vet the day after he arrived, she recommended we see a canine dentist ASAP. Ralph got an appointment with a wonderful Dental Center two days later, and in those two days Ralph did not eat much. We thought it was because he was getting used to his new environment, but the dentist diagnosed him with a severe malocclusion and only 50% range of motion in his jaw. Some of his bottom teeth were embedding in the roof of his mouth due to this misalignment, causing pain while eating. The dentist recommended extracting 8 of his teeth the relieve the pain he was experiencing, as well as hopefully encourage forward growth of his bottom jaw and increase range of motion. He had the surgery that same day. Soon Ralph was able to eat comfortably, gain weight, and run around like a normal happy puppy.Unfortunately, this malocclusion has only worsened over time. Now, at 5 months of age, his overbite has become more extreme, and his range of motion is rapidly declining. He now only has approximately 10% range of motion in his jaw. Currently, with the help of a special bowl and mashed up food, Ralph is still able to eat and grow. However, due to his condition worsening, the dentist believes he will soon lose the ability to eat, drink, and breathe adequately, along with his quality of life, if no intervention is made. His condition has grown past what the clinic has the tools to handle, so they have referred us to the University of Pennsylvania, where Ralph is scheduled to visit later this month. There, he will undergo a CT scan of his jaw, and potentially a condylectomy of his TMJ to allow him to better open his mouth. Due to his limited range of motion, he cannot be intubated normally for sedation for the CT or surgery, he will need a tracheotomy. This leaves Ralph with a stay in their ICU for monitoring, a longer recovery, and a higher bill. This visit to Pennsylvania is estimated to cost a minimum of $10,000. This is coming after the thousands we have already spent on Ralph’s first surgery, and subsequent vet and dental visits. Ralph is a happy and loving puppy. He wakes up wagging his tail and waiting for love at the foot of our bed everyday. We want to give him every chance of continuing his quality of life, and being a happy dog, despite his unfortunate breeding.