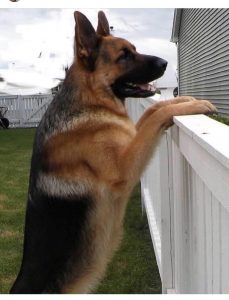 Update: It is with a very broken heart that I have to post this message. Odin was doing well after surgery but there was an embolism that occurred and they were unable to save him. Our hearts and prayers go out to his family. Run free at the bridge sweet boy.

Odin is amazing. He’s the dog that the all the little kids run up to in the park and ask if they can pet him. People stop their car in the street to tell me how wonderful he is. He saved our lives from a would be intruder. He is the first to come to our rescue when we are hurt or injured. Odin loves watermelon, cream cheese and doggie ice cream. Odin is just the coolest dog ever. Nobody greets me at the door like he does. He loves us so much and all he ever asks for is a pet in return. He has always been admired because he just knows he is as cool as he looks. He has kids in this house who are in tears and love him so much. He’s a dog, but he is simply amazing. You look in his eyes and you see a soul. You can just see him pleading to you, telling you he wishes you understand what he is trying to say to you. What if dogs could talk? That question has come up so much over the years. We can’t begin to put our love for Odin into words. We can’t describe the heartache as we are hoping he hangs on as we try to save him time. He has a mass on his spleen that needs to be removed immediately to save his life. We sincerely appreciate your time, thank you. Odin thanks you.