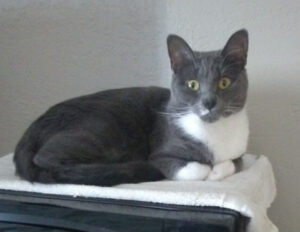 UPDATE: Lucky was able to have a successful surgery and is recuperating. Thank you to everyone that made this possible.

Lucky (my cat) was the only kitten that survived birth out of 3, her mom ran off when lucky was just 4 weeks old, I bottle feed her until she was old enough to eat regular cat food, but she never would eat any, so I was eating a piece of chicken one day and I gave her a little bite to see if she would eat it and DID she!!! She never did eat cat food, she had to have chicken breast and only chicken breast, rotisserie chicken was her favorite, she was always in excellent shape and the smartest cat I’ve ever seen, she loves to play fetch with her mouse, she brings it right back to me, she understands what you’re saying to her like no other cat I’ve ever seen, ask her something and she know exactly what you’re talking about, I could go on and on about her IQ but she had gotten constipated about ten or so ago, I took her to the vet thinking they would give her an enema and it turned out she has an infected uterus, called pyometra, and if she don’t get the surgery done ASAP she’s going to die, lucky brought me out of really bad depression, I was at an all-time low until she came into my life and by me taking care of her it brought me out of my depression, I can’t imagine her not being here anymore, they said it probably caused by not being spayed, I was trying to decide on letting her have a litter because of how smart she really is, but it turned out to be a huge mistake, the vet said it’s rare for that to happen to cat almost a year and a half old, but with me being disabled the money for the surgery just isn’t there, my sister gave the vet 700 dollars to help her as much as they can but surgery is her only option and time is very short, that’s why I’m praying that Cambridge can help save Lucky’s life.