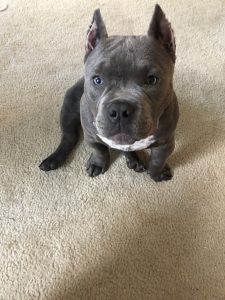 This is our puppy Louis last week he went into respiratory distress out of nowhere and I had to rush him to the ER. I didn’t think he was gonna make it he was chocking so bad and couldn’t breath and was turning blue…when we got there they rushed him back and had to intubate him to maintain an airway and did an exam they found he has an elongated soft palate and everted laryngeal saccules…he has Brachycelphalic Airway Obstruction Syndrome…He was not breathing on his own and had to be kept over night. I took all the money I had saved up which was $2,400 and had to give to them to save his life and keep him over night. I talked to the surgeon the next day which Louis was finally breathing on his own but needs immediate Laryngeal Surgery which they gave me an estimate for $4,000 that’s the high end because he’s at higher risk because of the pneumonia and his breed…he had to come home for a couple days because he has pneumonia in his lungs from the intubation tubes or from throwing up and has to be on antibiotics. He needs this surgery as soon as possible but I have nothing left. I’m a single mom with 2 kids on disability. I just got this puppy 3 months ago and never thought I would have to deal with this but he is my baby I will do anything to save his life My kids love him and its really sad that a puppy this young needs surgery but it has to be done ASAP. Louis can not do anything he can’t go for walks can’t be around people. He has to stay calm and not active and can’t be alone or he can go back into respiratory distress. I don’t like asking for help but I have applied for care credit I have been denied and have reached out to every organization and have had no luck I’m just out of options….so I’m hoping to get enough in donations to get his surgery…everyone that has ever meet this puppy has fallen in love with him he is the sweetest thing and I’m so blessed to have gotten him. Please help save his life he is 5 months old and has tons of life left this is something that has to be done its not a choice anything would really help no donation is to small…Thank you sooo much