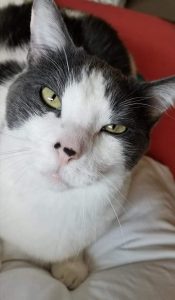 Update: 6/6/2018 It is with a heavy heart that we inform you that Lotus crossed the bridge. He fought very hard to stay but his kidneys just would not recover. Thank you to all that donated and kept Lotus and his family in their thoughts and prayers.

Lotus has been a loved member of our family for 2 1/2 years now. My 3 children adore him and his “pal” or “sister” Birdee (a Persian mix girl) and him are very bonded. On Thursday we noticed inappropriate peeing outside of a door in our home. It is not like him at all so I immediately knew something was off, but since he did express we gave him d-mannose thinking it could be a UTI. He improved and continued to pee that day with no issues. The litter box was cleaned that night and he had gone through out the day in it. Friday comes and he seems his normal self again and we think nothing of it. Friday night he squats on the bed and looks like he is going to pee but nothing comes out. We take him to the litter box and he squats for about 5 minutes, nothing comes out. That is when I noticed that he has not peed in the box since it was cleaned Thursday night. Vet was closed. We rush him in Saturday morning and he is diagnosed with a blockage. They release the pressure of the bladder through needle aspiration and find a lot of crystals. We opt to have him sedated and cathed to eliminate the blockage and flush the crystals out. They do this, as well as put in a solution to break up more crystals. The plan was to keep him cathed Saturday through Monday to help keep the bladder empty and then hopefully flush more out Monday morning. However, Saturday night when he was checked on he had pulled the cath out. The vet came Sunday morning and noted he was again blocked. She aspirated the bladder once again to relieve him but since they were technically closed for the day that was all they could do. Monday morning we opt for PU surgery and we get to visit him for a few minutes. I can tell right away that he is very stressed and not himself and feeling really horrible. They have him on the schedule for surgery at 2pm and I express concern in waiting (about 4 hours) since he was acting so sick. They assured me it would be okay. I call at 3:30 to see how he did and find out that they didn’t start until later and they were in the middle of the surgery when I called. The vet called me Monday evening to say that he was waking up from the surgery, it went really well, they flushed out the crystals and they are easily able to express his bladder. He stays overnight for observation. This morning they call and tell me that he is not doing well and is acting like he feels really awful so they ran labs again and he had some kidney trouble from the blockage. They have flushed him with a high rate of fluids to dilute the toxins in his blood and now he has swollen back legs and they suspect that he had a rupture in his urethra from straining while blocked and that its leaking in to his legs. He is not acting any better with all of the fluids either and since his kidneys aren’t doing very well they cant put him under again to fix anything so they have to put him through the stress of a local or epidural in order to see what the issue is and repair it.