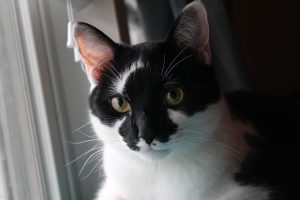 Hi everyone, my name is Samantha and my sweet one year old kitty Kramer has developed obstructions in his urinary tract. This is a fairly common issue among male cats and it has unfortunately affected my Kramer in a big way. He began exhibiting weird behavior such as urinating outside of his litter-box, intense thirst, and he became unable to urinate after just a short amount of time. This condition can cause death in as little as three days in a cat and so I had to take him to the emergency animal hospital to be treated immediately. They inserted a catheter, removed the obstruction, and he was able to relieve himself with ease for two days, with his urine looking satisfactory. They removed the catheter to make sure he was able to go on his own but had no luck as he re-obstructed almost immediately. I was to make the decision whether to proceed and try another round with the catheter or lay him to rest.
I rescued Kramer from a storm drain in the back lot of a car dealership a little over a year ago. When I found him he was covered in fleas, malnourished, scared, and alone at just five or six weeks old. He has been my best friend ever since I brought him home that day and nursed him back to health. I got him vaccinated, dewormed, neutered, and he started eating a regular diet. I have done everything in my power to give him the best life a kitty could possibly have, and I have loved him so dearly ever since I rescued him. It is so painful to think about putting my sweet baby to sleep as he is only a year old and has so much more life to live.
The veterinarians have prepared me for the next step if the next round with the catheter does not work, which is very likely since he obstructed almost immediately after removal the first time. This would be a perinea l urethrostomy and they gave me estimates ranging from $1,200.00 to $2,200.00, but I will surely be given a more definite figure in the next day or two as we move forward. Studies have shown that 88% of cats who have had this procedure live the remainder of their lives with improved health, no recurrent urinary issues, and longevity.
I just want to hold my baby again- I know he is scared, confused, and in a lot of pain and I want nothing more than to bring him home happy and healthy. I am a 21 year old college student, and waitress to pay my bills, with a full load of classes approaching in just over a week and this has absolutely devastated me and my financial stability. I have already paid a portion of the current bills at the animal hospital and am now just scraping by. I will not give up on my baby because I didn’t save him just to give up. He means the world to me and I miss him being my first hello in the morning and the one to snuggle up with at night. Please help me give my baby the care he needs in order to survive.