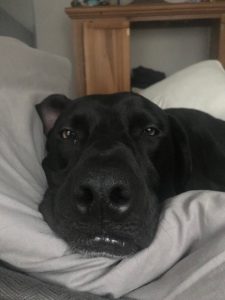 UPDATE: Huckleberry had a successful surgery and is home recuperating – thank you to all that share, donated and kept Huckleberry and his family in your thoughts.

Please meet the best doggo in the world. Although I never thought I would need to reach for this type of outside support, he and I need your help. My bright and happy guy tore severely tore his CCL playing with a very good dog friend in the park. Huck cannot walk on this leg. Because the tear is so bad, conservative treatment is no longer an option and his opposite knee is now also at risk. Huck is receiving 24-hour a day sedation and pain medication as he awaits the doctor who can perform knee replacement surgery on February 27th. This operation is his best chance, as a four-year old, to not only be able to walk normally and run again, but also to avoid spinal issues related to the arthritis that will set in without repair.
I have never really asked anyone for a whole lot of help, but Huckleberry has changed all of this. He has come so, so far and I simply cannot afford more than his first round of pre-op testing. I almost lost him this past March through a simple food change that led to severe hemorrhagic diarrhea. The bills for his hospitalization then were staggering, and I am still paying on them. His severe anxiety from past maltreatment requires general anesthesia in order for a complete exam, x-rays and bloodwork; let alone treatment. His surgery is expected to cost nearly $6,000. This is conservative and does not include any post-op rehab as he learns to function with his new knee hardware.
Huck was born in captivity and fostered for 12 weeks in a no-kill shelter. I had lost my beloved Golden (also a rescue) a few months before and thought I would just go and “look”. The staff introduced me to a very bouncy, almost spastic, Great Dane/Lab named Ranger. He had been at the shelter for about five months “this time”. They told me he was unadoptable; that he had separation anxiety. They told me they would waive the adoption fees and give me a gigantic crate if I would take him. His first owner brought him back saying he chewed through too many things. After several more months in the shelter, he was adopted a second time. After being allowed to run off leash, Ranger was hit by a car. When he was released from the hospital, they too, brought him back. That’s when I walked in.
This very sweet boi was infected with a ton of parasites and was thin enough that his ribs were showing. He was so anxious, he would not allow anyone to pet him. He would grab onto clothes of anyone new he met and pull them around. He was fear aggressive with dogs and people. His very first night in his forever home, he simply stood on top of the bed and barked at me non-stop for 20 minutes. He was allergic to every food except a prescription diet. Yet, his floppy tongue and ears—and the way he followed me around— got to me. His eyes, so big and round, also said his heart was friendlier than his outer shell would have you believe. That’s when I re-named him Huckleberry.
I brought a behaviorist into my home for one-on-one lessons so my guy could learn not to tug on people, lunge at other dogs/squirrels/frogs. I spent hours and hours leash training him so he could learn not to go nuts when he passed loud, muscle cars. Things progressed to where Huck finally, finally began to put his head on my lap, sleep next to me in bed and roll over onto his back for belly rubs. That’s why he needs your help. He and I have taught each other so much in the past two years and this episode threatens to put that all at risk.
I would appreciate anything that you could do to help get him back to good health. Exercise is such a key part of his rehab, of him learning what it means to be a happy dog, and not revert to old behaviors. He really is his own dog miracle. We would be forever grateful for a chance to keep learning what it means when a mistreated dog can learn to trust and be happy again.