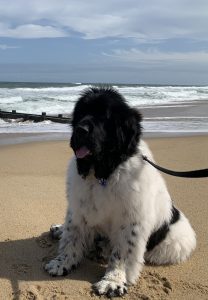 UPDATE March 2020, Update on Fred’s surgery…. Due to the Coronavirus the Dr. (coming from Italy) can not get here to do the surgery. The next available time that he will be in the country is in July which means Fred will have to be closely monitored till then. Please keep Fred and his people in your thoughts.

Update 2/18/2020 He was seen in October by the surgeon but because Fred had some skin issues they could not do the surgery then. He is now scheduled for March 9th and at least $2,000 is still needed.

Update from Fred’s mom
Fred had his cardiology appointment this morning. Because he has some bacteria on his skin from hot spots the surgery will be postponed. I am relieved and worried. Relieved because we can go home tomorrow. Worried because the next time this doctor is in the US is March. They did a 12 pt EKG, an Echo and they will culture the skin area since he has been on antibiotics for 10 days. His tests confirmed everything and that he is a good candidate for the cardiac ablation surgery. So we will be back in March for the surgery.

Meet Fred! Fred came into Colonial Newfoundland Rescue in 2018 from a shelter.  His previous owner was going to breed him and then got divorced.  I adopted him in 2019.  Prior to a routine dental cleaning the veterinarian heard an abnormal heartbeat.  He confirmed this with and EKG.  He was put on medication to try and control the heartbeat but that is not working.  After consulting with his primary veterinarian and a local cardiologist they recommended a procedure called cardiac ablation.  This is only done by one surgeon in the United States.  It is the only procedure that will help him since the medication is not working.  Without this procedure he will eventually die of heart failure.  Of course, no veterinarian can tell how long that would be.  Fred is a wonderful Newf and will make a great therapy dog.  I have already started training him for this.  The consultation and diagnostics will cost $2500.00 and if they decide he is a good candidate for surgery then it will cost $6000.00.  Due to an emergency surgery with my other dog maxing out the funds I had for Fred I now need to ask for some help.