Hello, my name is Dianna. My family and I have a 13 year old lab that we’ve had since he was 6 weeks old. Now that he has slowed down a bit we thought a furry younger companion would be great for him! We decided we wanted to rescue this time around! We went in to a local shelter to see a specific dog they had posted online, but fell in love with another….a beautiful 5 year old chocolate lab mix that the shelter had named Velveteen!” When I asked the shelter volunteer if I could meet him out of his kennel. The volunteer rudely responded, “Oh, THAT ONE? He only has 3 legs!” My heart dropped!!! I was like WHAT???!! Then I immediately answered, “OK…But can I PLEASE still meet him?!” When Velveteen was brought to the meeting room, he immediately put his gorgeous little face in my lap and gave me a kiss! We instantly KNEW he was “THE ONE” we wanted to rescue! We brought him home that afternoon and named him Cooper! Two days later we took Cooper in for his 1st Vet visit. We had no known medical history other than the obvious; that he was missing a back leg, so we wanted him thoroughly evaluated. 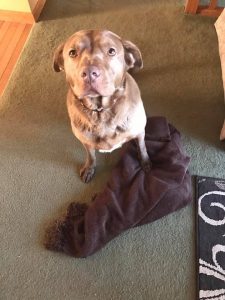 We feared his remaining back leg could have also been injured because of how he would drag it along and was very hesitant to put pressure on it. We hoped that this behavior was due to him being locked up in a kennel for almost 2 weeks before we rescued him. We thought he needed to regain strength in that back leg, but that was not the case! Based on the x-rays taken at this visit, the vet suspected that Cooper was hit by a car, causing one leg to be amputated and dislocating his other hip! The Vet says the reason he is dragging himself around is because he is in a lot of pain with his hip out of socket and therefore needs a total hip replacement! It’s so sad to see this gentle loving soul be as happy as he can be considering his pain and limitations! We want to do everything in our power to give him this opportunity for a new life!

We were sadden to hear that Cooper will have to endure another surgery; but on the flip side so happy to hear that given this option, Cooper will be just as active as any 4 legged dog! Amazing right?! The total costs for this surgery are estimated at $5500. This will include his surgery and therapy sessions after the surgery.

Cooper the Trooper, as I call him would be so ruff-ful for any and every donation received! Thank you for taking the time to read our adoption story of Cooper. It’s an amazing feeling to be able to open our home and hearts to such a loving doggie!!! God Bless You and thank you in advance for your generous donation!