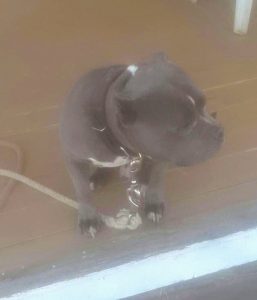 Hello. I have a beautiful boy named Chipper ( at least that is the name I gave him when all efforts to locate his former owner were exhausted!)
I was on my way to the City one day to pick up my dentures. I stopped midway to buy a snack. Jogging around the parking lot was a severely malnourished American Staffordshire terrier. The people at the drive thru window said he had been hanging around and they were about to call the dog pound on him. The lady also said he would probably be destroyed shortly after getting there because the local shelter was overcrowded. I bought the poor dog a couple of burgers and he jumped into my car.
After arriving in the City I told my dentist about the dog. She said she was a member of several online lost and found groups and she would try and help me find his owners. Well, that never happened, so I became the owner of this handsome boy.
After about 6 weeks of lots of food (and several baths) I took Chipper to the vet for a rabies shot and to start him on heartworm preventative. Unfortunately he tested positive for heartworms.
I’ve been so sad about this because he is such a nice dog: he is friendly, loving, and obedient. He sleeps on his pillow next to my bed and very rarely barks. He has gained some weight but I know he will continue to suffer until he dies prematurely from this issue. When the vet told me the cost of treatment I was floored.
I live on a fixed income and there’s no way I can afford $1,000-$1,200!