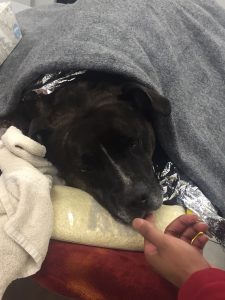 Update:4/21/18 Boogie has had a successful surgery but is not rallying well at the moment. Biopsy results are still pending and he is jaundice. All of this means extra treatment and extra time at the hospital. Any help is appreciated as the bill is still climbing.

I am the owner of Boogie which is an 8 year old Brindle Pitbull. On Tuesday, March 17th after coming home from the movies. I noticed that Boogie was acting strange as if he was scared. I thought somebody had did something to him. He went outside for a while and wouldn’t come when I called him. He did come inside with my grandson and went into his cage. My Grandson then called me and said Boogie was sick and lying on his side. I went downstairs to his cage to try to get him to get stand up but he could not really stand or walk . After a couple tries, he did walk to the steps and he stopped for about 2 min then he walked up the stairs and stopped at the landing and laid down again and could not go any further. So we picked him up and we could tell that he was really, really weak. At that time, we knew something seriously wrong because he does not like being picked up. But this time there was problem with picking him up. He was some cold and almost lifeless, so my Grandson brought Boogie into my bedroom where he usually sleeps. I called the Emergency Veterinary Clinic in Catonsville and told them how Boogie was acting. They told me to bring him to the hospital. After arriving at the hospital, I was told that Boogie was critical with low blood pressure and his body temp was 93 degrees when it should have been 101 degrees and they needed to take x-rays and run other tests. I was told that Boogie had a Tumor growing on his spleen that had ruptured and was bleeding into his stomach. His heart beat was weak because of the blood going to his stomach They said he needed surgery immediately or he would die. I am 82 years old and live on a small monthly retirement check. Can you please help us save Boogie.